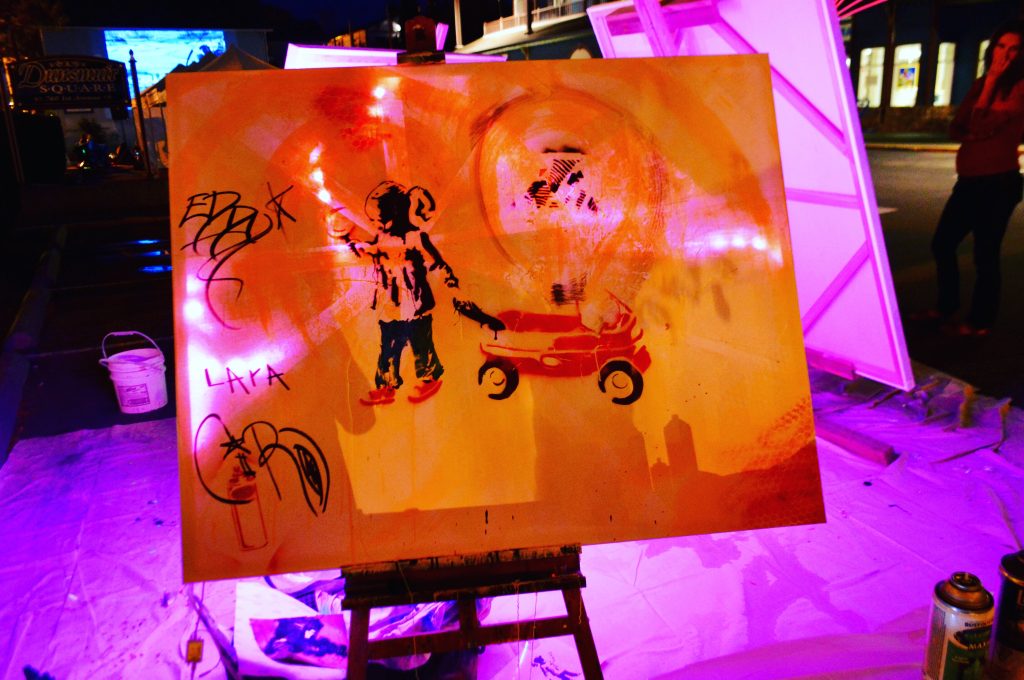 For second year, Light up the Night kicks off Arts on the Avenue event downtown Chalk drawings filling the parking lot in front of the library. Eager children piling into handmade, hand-painted cardboard cars before a makeshift movie screen. A young girl from Calgary adding her creative talents to those of an artist from Vermont as he raced against the clock to birth an award-winning painting. Such was the scene during Light Up the Night, Saturday evening in downtown Ladysmith. No one would describe this event as a bustling urban street festival. But on a pleasant August evening, enough people and opportunities to play collided along lower First Avenue to demonstrate that a small-scale evening kickoff to the annual Arts on the Avenue is a step worth continuing. According to Arts on the Avenues Kathy Holmes, Light Up the Night drew about twice the people in this, its second year, as it did in its first. And word-of-mouth collected during the event indicated the relaxed, family-friendly atmosphere encouraged by feedback following last years debut was exactly what the people were looking for. Light Up The Night took up about half the physical space of Arts on the Avenue, the community staple that played out for the 19th time Sunday. The crowds were larger and noticeably older as First Avenue was closed between 10 a.m. and 4 p.m. from Buller to Warren streets for Arts on the Avenue as about 50 artists showcased their work. Long-time noted Ladysmith artists like Michael Dean, Jack Fisher and Vic Duffhues were joined by emerging local talent, guests from neighbouring communities and special guest artist Dan Gray. Not only does Arts on the Avenue provide them with a venue to showcase and sell their work, it also draws visitors to Ladysmith from across the Island and beyond. Crowds were steady and forecast rain mostly stayed away. Credit: John McKinley Ladysmith Chronicle Word count: 317 Copyright (c) 2016 Torstar Syndication Services